October 6, 2017 came very fast and this was going to be my second attempt at round 2. Mom had stayed the week with me verses flying home just to fly back. She told me she wasn’t going to be missing any of the treatments. I understood completely. Now I was very anxious about this treatment. I was hoping my body wouldn’t reject any more of the remaining chemo drugs. I was down to just 3 chemo drugs now. They went back to the initial rate of infusion and told me this would be the normal for all of my upcoming treatments. It was successful and I was back on track. The side effects were very similar to the first round with the exception of the mouth issues, thankfully. I would also say they weren’t as amplified either but by no means were they easy. Having my mom with me helped out a lot. She would force food at me. This time Sunday I did eat some toast and drank some water then pretty much slept all day. Monday I was awake a little more and I ate a breakfast and some dinner.

Some of the things I’ve learned about chemo side effects, they don’t all happen right after treatment. My gastric issues start usually 4 days after and last for 4 days or so. The funny taste in my mouth starts 6 days after treatment and lasts for up to 2 weeks. I’m not sure how to describe the taste except maybe metallic. I learned using plastic silverware helps to taste foods, I always carry some with me.  I was able to tolerate more flavor than others I knew going through the same treatment. I believe this was due to the Perjeta being removed because after my first treatment it was bland foods I could tolerate. Chemo brain is a thing; it gets worse the more treatments you have. I could be in the middle of a sentence and literally forget what I was saying. This is something I had never experienced before or perhaps never noticed.

I started losing my hair two weeks after my first treatment chemo treatment. It began slowly as I was brushing it and the brush would take more than the usual amount that comes out. I had very long blonde hair. I had asked one of my friends to cut it short for me. The thought of going to a salon and having it chopped just wasn’t appealing. I believe it was having to explain to someone else what was going on I just wasn’t in the mood for that. He came over and worked some magic I suddenly had a pixie cut with a little extra on top. That description sounds horrible but it was super cute. Thanks Craig! I was very lucky I didn’t have a large head like I thought I might. This cut I was able to keep through the second treatment then the rest just started coming out so I asked him if he could take it all off. Below is a timeline of pictures that show how quickly it happened all dated. The first photo I was maybe having more hair on my brush each day, the second is when it started coming out in chunks, the third is the first cut he gave me, and the last was when it all got shaved off.

I was very surprised to realize losing my hair was the hardest part for me so far. I find that nothing looks right on me or looking in mirror I don’t see me looking back. This effects everyone differently so be careful of what you say to those going through treatment. Most days I wore beanies or bandanas but I did have some fun wigs I occasionally wore. 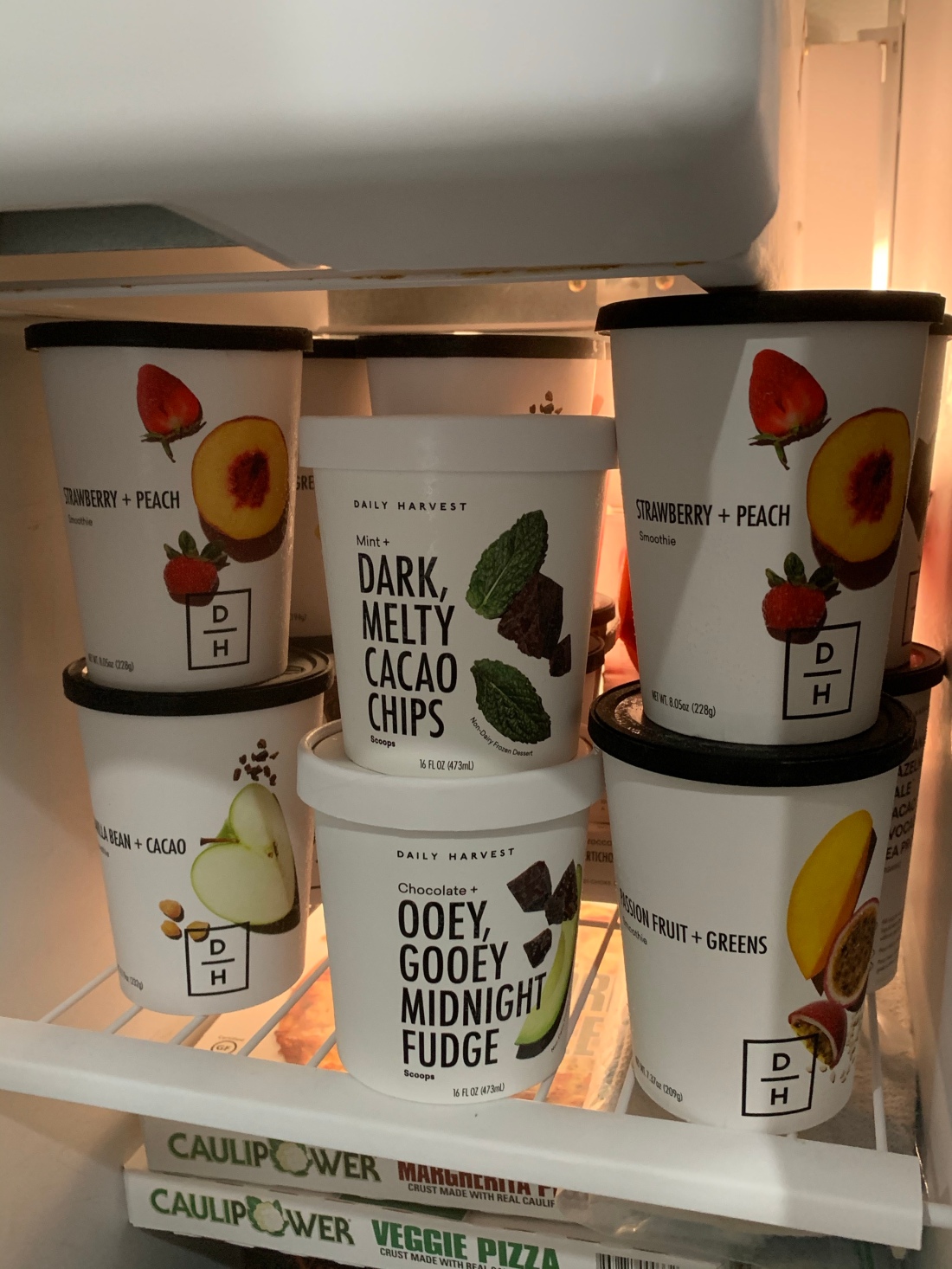 I first tried Daily Harvest in December 2019. I had been hearing about them through one of my favorite podcasts. I decided to use their code to save $25 off my first box and give them a try. After my first box I was hooked. My first box I did a variety of items, 4 smoothies, 2 oat bowls, bites(these are amazing), a soup and a latte. A few months after I started ordering they came out with the flatbreads, my favorite is the spinach artichoke. Then this summer they released their scoops, a delicious creamy treat(basically a dairy free ice cream) I got have the mint chip and dark chocolate. They are weekly boxes and I typically get 2-3 boxes a month. The size box I get is 9-11 items and typically is mostly smoothies since that is an easy way for me add protein in and get a good mix of carbs, fats and protein. If you are interested in trying daily harvest click here to save $25 off your first box. I also get $25 for referring you. They come frozen in a box with an insulated packaging with dry ice(careful). Once you receive your box store the containers in your freezer until you are ready to use them.

Here are a few of my favorites that make regular appearances in my boxes. I use water as the base however, you can use almond milk, coconut water/milk, milk or whatever your preference. Also adding protein is not something you have to do, I do this since I struggle with getting food down (chemo side effects) so when I make a smoothie I try to make it as nutritious as possible. When adding a protein powder I do add additional water and I mix it up in my nutribullet(any blender will work).

If you are interested in trying out this amazing small business click here to save on your first box. If you do try them let me know in the comments what your favorite flavor is. As long as there is no almonds I will give it a try.